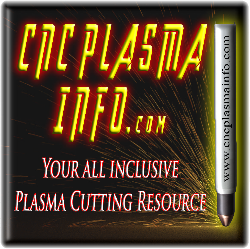 Here is another topic guaranteed to stir up some heated conversations and debate.    Like most of this website the information on this page is based on my experiences and research.   I have also included some videos, links to sites and downloadable pdf’s that contain MSDS - Material Safety Data Sheets on the chemicals that I’m discussing.   So lets fire up this debate and see what you think.

Check out our comparison of Water Table vs Downdraft Table Page.

The use of a water table in plasma serves a few purposes.   The idea is to use the water to keep the material being cut cool during the cut process which helps to reduce warping and distortion in thin or highly detailed pieces.   The water also is used to capture the smoke and dust created from the cutting process.   With using water comes some challenges.   Water can go stagnant creating odors, grow things, and cause rusting problems with the metal your cutting.  Thus comes water treatment.  The goal of water treatment is to prevent rusting both in the table and on the metal we are cutting,  and to prevent the water from turning into a science project and growing things like algae since its a stagnant body of water.

I’m on my 3 table and have been doing this almost 20 years.   When I started out I began researching and trying various products on the market Here are just a few that I have tried:

Plain water -  For me this was a complete disaster,  Rusting started on the slats immediately and spread to the sheets rapidly during cutting.  The table also grew algae and after a week of heavy cutting was just a mess.  Draining and cleaning the table was also the most difficult with plain water.  The metal dust formed hard plates of slag that were difficult to remove and adhered to the slats and bottom of the water pan.

Plasma Quench 44 - This was ordered from Knight enterprises and is a commercial product for plasma cutting tables.  I ordered a 15 gallon tote.  The chemical is a registered Hazmat and ships as such ($$$)  which should have been my first clue that it was not a good choice.   The product relies on being a very strong oxidizer / alkaline to inhibit the rusting process. That comes with a price in that it is not good for skin contact.  The reality of having a water table is that you are going to be getting splashed, reaching into it and retrieving parts on a regular basis.  Wearing gloves and a rubber apron are recommended for this but in reality it does not happen.  The Plasma Quench burned my hands and skin, damaged clothing and added a not so nice smell to the shop.   While it did do a decent job of stopping rust it was not human friendly and I got rid of it.    You have to remember that what ever you put into the water will be exposed to high heat, extreme UV and atomized into the air.  So your going to breathe it.  Here is the MSDS for Plasma Quench 44.

Plasma Quench Home Brew -  This is very similar to Plasma Quench but you purchase and mix a few chemicals.  If your really interested you can look up various recipes but the chemicals involved are;  Sodium Nitrite, Physan 20 and sometimes a color dye.  The experience with the home brew was about the same as with the commercial brand and after research the use of Sodium Nitrite and Physan 20 after high heat and uv exposure with atomization is not good for humans. Sodium Nitrite MSDS,  Physan 20 MSDS.  Anything that contains Nitrite’s will break down and create a chemical compound that will attack steel.

Rust Block -  Rust Block is a product from the people that make Evapo -Rust.   They asked me to give there product a try as a plasma cutting fluid additive.  It was not intended for this purpose but they wanted to see how it performed.  The product was designed as a environmentally safe product that was water soluble, biodegradable, non-corrosive and skin safe.  So it sounded pretty good.  The product was intended to be sprayed on metal or used as a dip to  prevent rust. I mixed it in my water table to achieve the same results but I found that it was not effective. I doubled the concentration and still did not achieve desirable results.  I was unable to determine if the heat and UV were causing problems or if it needed to be a full strength solution which would be cost prohibitive.   It sounded good but did not work for me.   MSDS for Rust Block.

GreenCut Plasma Fluid - In my quest and research I had not found the perfect product yet and stumbled on GreenCut. GreenCut is made by Lube Corp a Canadian company.    GreenCut was advertised as a product specifically designed for plasma cutting and it was People Safe and Environmentally safe.  GreenCut is manufactured in Canada and US distribution comes with a high price.   With GreenCut for it to work properly you will need to carefully monitor PH levels and the product needs a re circulation system and filter for it to work its best. Check out the GreenCut MSDS and compare it to the others above.  While it does work and its safe it comes with a high price and a decent amount of work to keep it fine tuned.    I used it for many years because for me the it was the only safe option that I knew of.  Until I found SterlingCool

SterlingCool by Cutting Fluids Direct  -  I began seeing posts about SterlingCool online and saw that it was quickly gaining popularity among plasma cutters and contacted them to find out all I could about the product.   I contacted the company and hit them with a thousand and one questions.  Got the data sheets looked at the chemicals involved the mixing ratios, maintenance requirements and everything else I could think of.   SterlingCool had all of the safety components and environmental safety aspects of the chemical I was using before which was my main concern but it also included a lot of things my last chemical did not.   With SterlingCool I no longer needed to run a re circulation pump or filter on the system.  One less thing to worry about or maintain.   I also did not need to batch mix it when I first added it to my table.  It was as simple as pour in and add water. SterlingCool also had been engineered to release hydrogen and assist with off gassing increasing safety when cutting Aluminum.   SterlingCool also made maintenance and upkeep much more simple.   Since SterlingCool does not rely on PH to keep the rust away you do not have to constantly monitor the ph of the table.  Its very forgiving and the rust inhibitor is built in the liquid.

Cost -  Its hard to put a price on your health but many people try and take the cheapest route possible often putting their health at risk when it comes to plasma cutting additives.   SterlingCool is much less expensive than the chemical I was using before and where the real cost savings is in Shipping.  With other options shipping is as much or more than the product.  SterlingCool offers Free shipping for most of the US.  At the time of this article a 5 gallon pail of Sterling Cool is running $121.00.  Enough for a 100 gallon table.   They do offer it in 55 gallon drums and commercial totes as well.

Maintenance -  SterlingCool is a 20:1 mix ratio like many others 20 parts water to 1 part SterlingCool.   They made the product very forgiving and you can mix with hard or soft water with no change in effectiveness and no need to add anti foam or other chemicals depending on your water.  To keep your ratio at the correct range they recommending adding water to refill your table as needed and every forth time you add water add a mixture of 16 oz of SterlingCool to 5 gallons of water.  If you want to be real technical you can get a refractometer  and measure your solution keeping it between 2 and 3% on the refractometer.   SterlingCool is designed not to evaporate from the table and only leaves the table in 2 ways.  Splashed out, or carried off on parts, but it has a low carry off rate so this is not much of an issue.  This is why you do not have to add SterlingCool every time you add water. As far as a total switch or clean-out  there are no specific recommendations on this and will vary quite a bit on table size, use, and how clean your operation is.

My Observations from using it -   After using it and comparing it to what I had before I have noticed a few things.  My rust protection is as good or better than before.   It protects sheets even after cutting.    My dross seems to be less than what it was before with no change in cut parameters.    No white residue or staining on aluminum, stainless or mild steel.   I’m able to go straight to paint without doing anything other than wiping the parts dry.  No secondary cleaning process has been necessary.  It does not foam up like other products I have used.  The slag from cuts balls up instead of turning into a powder which makes cleaning out the table much easier. Its skin friendly no skin irritation from contact. Virtually no maintenance super simple pour and go.

Conclusion -   Many of the products out there are so bad for you just read the MSDS on these things and most were never intended to be used for Plasma.   For example  I hear people all the time telling people to use Borax in there table or washing soda.  They say its in soap and laundry detergent so it cant be bad for you. That's fine and likely true when used as intended but when you expose chemicals to high UV and heat and then atomize them into the air and now are breathing these things in it changes things.   Borax when ingested will sterilize you!  You don't eat soap or laundry detergent with Borax so its not a problem but working around a working table with Borax in the water that is exactly what your doing. Check out the MSDS for Borax and read for yourself.   Using a quality product like SterlingCool instead of homebrews will do wonders for your health.  Its an amazing product and does so much better than plain water.   The cost is negligible compared to the work and cleanup of rust and other problems associated with plain water.   SterlingCool is trusted by thousands of companies in the US, Canada and Europe.  So don't just take my word for it.   I was happy with what I had until I tried SterlingCool I would challenge you to give it a try like I did.  I’m happier than I was before and I’m paying less for better performance.

Just think of it this way, is it really worth it so save a couple hundred bucks a year so that in a few years you can end up with health problems?   If you answer honestly its not worth it.  Use a product that is intended for plasma cutting and safe for you. Use SterlingCool.

Do you want more info on SterlingCool?